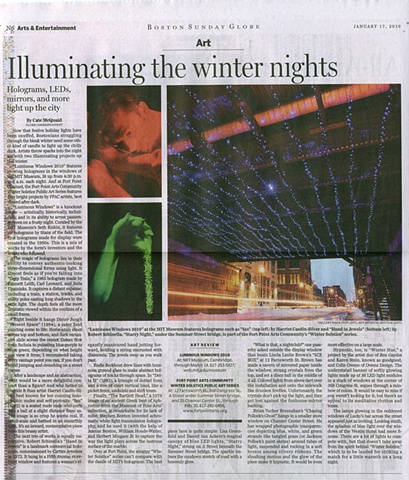 Now that festive holiday lights have been snuffed, Bostonians struggling through the bleak winter need some other kind of candle to light up the chilly dark. Artists throw sparks into the night air with two illuminating projects up this winter.

“Luminous Windows’’ is a knockout show - artistically, historically, technically, and in its ability to arrest passersby, even on a frosty night. Curated by the MIT Museum’s Seth Riskin, it features six holograms by titans of the field. The first holograms made for display were created in the 1960s. This is a mix of works by the form’s inventors and the artists who followed.

The magic of holograms lies in their ability to convey authentic-looking three-dimensional forms using light. It almost feels as if you’re falling into “Deep Train,’’ a 1965 hologram made by Emmett Leith, Carl Leonard, and Juris Upatnieks. It captures a distant expanse, including a train, a station, tracks, and utility poles casting long shadows in the eerie light. The depth feels all the more dramatic viewed within the confines of a small frame.

Right beside it hangs Dieter Jung’s “Present Space’’ (1984), a color field painting come to life: Horizontals shoot across top and bottom, and dark rectangles slide across the center. Colors flow from fuchsia to pulsating blue-purple to neon green, depending on what height you view it from; I recommend taking every vantage point you can, if you don’t mind jumping and crouching on a street corner.

After a landscape and an abstraction, what would be a more delightful contrast than a figure? And who better to provide it than artist Harriet Casdin-Silver, best known for her cunning holographic nudes and self-portraits. “Ian’’ (1992) is a seated nude male who curls into a ball at a slight distance from us. The image is so crisp he seems real, if small-scale and bathed in an unearthly light. It’s an inward, contemplative piece from this brassy artist.

The next trio of works is equally impressive. Robert Schinella’s “Hand in Jewels’’ is a landmark commercial hologram, commissioned by Cartier Jewelers in 1972. It hung in a Fifth Avenue storefront window and features a woman’s elegantly manicured hand jutting forward, holding a string encrusted with diamonds. The jewels sway as you walk past.

Rudie Berkhout drew lines with luminous ground glass to make abstract holograms of tracks through space. In “Delta II’’ (1982), a triangle of dotted lines and a row of short vertical lines, like a picket fence, undulate and shift tones.

Finally, “The Bartlett Head,’’ a 1978 image of an ancient Greek bust of Aphrodite from the Museum of Fine Arts’ collection, is remarkable for its lack of color. Stephen Benton invented achromatic white light transmission holography, and he used it (with the help of Jeanne Benton, William Houde-Walter, and Herbert Mingace Jr. to capture the way the light plays across the lustrous surface of the marble.

Over at Fort Point, the scrappy “Winter Solstice’’ series can’t compare with the dazzle of MIT’s holograms. The best piece here is quite simple: Lisa Greenfield and Daniel van Ackere’s magical canopy of blue LED lights, “Starry Night,’’ strung on A Street beneath the Summer Street bridge. The sparkle imbues the rundown stretch of road with a heavenly glow.

“What is that, a nightclub?’’ one passerby asked outside the display window that hosts Linda Leslie Brown’s “ICE BOX’’ at 12 Farnsworth St. Brown has made a cavern of mirrored paper inside the window, strung crystals from the top, and set a disco ball in the middle of it all. Colored lights from above dart over the installation and onto the sidewalk like drunken fireflies. Unfortunately, the crystals don’t pick up the light, and they get lost against the funhouse-mirror backing.

Brian Tucker Bresnahan’s “Chasing Pollock’s Ghost’’ hangs in a smaller store window on Channel Center Street. He has wrapped photographic transparencies depicting blue, white, and green strands like tangled grass (or Jackson Pollock’s paint skeins) around tubes of light, suspended and rocking in a soft breeze among silvery ribbons. The shushing motion and the glow of the piece make it hypnotic. It would be even more effective on a large scale.

Hypnotic, too, is “Winter Hue,’’ a project by the artist duo of Ben Gaydos and Karen Stein, known as goodgood, and Colin Owens of Owens Design. The understated banner of softly glowing lights made up of 36 LED light modules in a stack of windows at the corner of 368 Congress St. segues through a rainbow of colors. It would be easy to miss if you weren’t looking for it, but there’s an appeal to its meditative rhythm and tones.

The lamps glowing in the reddened windows of Lucky’s bar across the street appeared just as inviting. Looking south, the splashes of blue light over the windows of the Westin Hotel had more finesse. There are a lot of lights to compete with, but that doesn’t take away from the spirit behind “Winter Solstice,’’ which is to be lauded for striking a match for a little warmth on a long night. © Copyright 2010 The New York Times Company