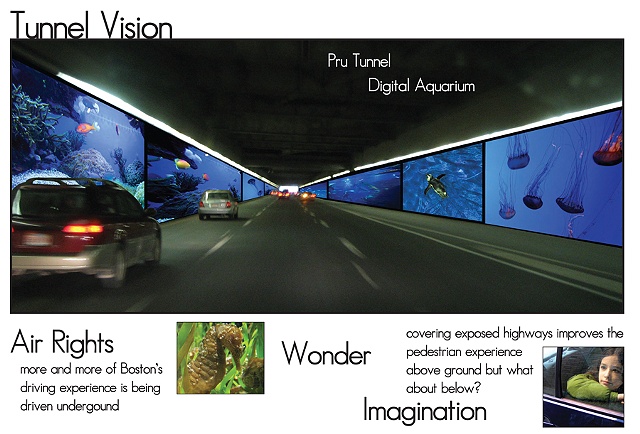 An island in the middle of the Charles River, a theater complex in an abandoned Green Line T tunnel, a marathon run on barges in Boston Harbor?

They may sound like crazy ideas, but they are all part of a competition meant to spark some spirited and fun re-thinking of Boston’s public spaces. Imagine watching a digital aquarium projected on the deadly dull walls of the Massachusetts Turnpike’s Prudential Tunnel or the chance to go clamming near the real Aquarium.

The idea for the ShiftBoston competition was hatched by two unemployed architect/designers as a way for the like-minded to unleash their imaginations on Boston’s public spaces.

“We thought it would be fun and a great way to tap into the creative energy out there,” said co-founder Kim Poliquin, 35, who was laid off from Cambridge Seven Architects in December 2008. “There’s a lot of designers out of work, and this keeps their brains thinking and gets them something to be excited about. There’s also a general feeling that what the city needs in design is a shift in attitude.”

ShiftBoston co-founder Dunja Vujinic, 25, also laid off from Cambridge Seven and a 2007 Wentworth Institute of Technology graduate, added, “This was a chance to give young architects a voice.” She said there’s a lot of frustration among those out of work.

Originally intended as a local competition, the challenge, which took more than a year’s worth of planning, snowballed into an international event, attracting 142 entries from 14 different countries and several dozen states.

And last Thursday, before a packed auditorium at the Institute of Contemporary Art, the group presented the winners of the competition to city and state officials - including chief Boston planner Kairos Shen, MassDevelopment Director Robert Culver, Secretary of Housing and Economic Development Gregory Bialecki and City Council President Michael Ross.

“We wanted to bring in people who make the decisions in government to share these ideas with them,” said ShiftBoston’s communications and technology director, Susan Yoo. “Our next step is to keep the momentum going and share the ideas with the public through a series of exhibits.”

An international panel of judges, led by Boston architect Brian Healy, winnowed down the entries to 18 finalists - all of whom came up with provocative ideas for the city. Somerville’s Bob Lowe proposed the creation of an island in the Charles River between Boston and Cambridge.

Fort Point artist Lisa Greenfield imagined a digital aquarium along the walls of the Mass Pike’s Prudential Tunnel. A Taiwanese design team proposed an installation that gathers wind energy on Fort Point and another group imagined a clamming cove surrounded by rocks near the current Aquarium.

Locals Katie Flynn, Annie Engstrom and Morgan Pinney’s idea, dubbed Beantown Beanshare, is to connect Hub homeowners with unused yards with those who want spaces for community gardens. And Cambridge designers John Mitchell and Brad Shuck proposed a marathon along a ring of interconnected barges in the harbor.

Honorable mention went to two Dutch designers for “What the Hell is This?” a play on former Mayor John Collins’ initial reaction to the City Hall design, and it whimsically provided new ideas to resuscitate the beleaguered building’s image by putting it on everything from keychains to pink lipstick. Two second prizes went to a New-York-based team that imagined vertical farming along prison walls and to a proposal for a superstructure built over Boston Harbor that would consist of a park above with residences built in bunches underneath. It was designed by 25-year-old Boston architect Moqi Liu of DiMella Shaffer and former journalist Erin Doolittle, who based the idea on Chinese grape farming.

The winning idea was to turn Boston’s abandoned subway tunnel under Tremont Street into an underground theater and gallery complex that would augment the Theater District and offer a new arts and tourist destination. It was imagined by former and present architects from Tsoi/Kobus & Associates of Cambridge, Andrew Zarzycki and Sapir Ng, who received a $1,000 prize and will have their idea featured on highway billboards and on the T’s bus shelters and subways.

While the excited audience enjoyed the imaginative and fun ideas, the unspoken question for many was whether it will help unemployed architects and designers get jobs.

“We do a lot of projects, big and small, and we want to make sure that young talent gets a chance to do design work,” said Bialecki, while state Creative Economy director Jason Schubach collected business cards.

Tom Keane, executive director of event co-sponsor the Boston Society of Architects, said “the point is not that these proposals get built,” while MassDevelopment’s Culver added that the state needs to be more creative in how it seeks design ideas - “to solicit and pay for ideas to get proposals going.”

Poliquin said she’s been so focused on ShiftBoston that she hasn’t been looking for work, even as she pushes to promote the organization both locally and globally.

“This competition shows how a new generation of designers isn’t content to sit on the sidelines - they want to make a positive and responsible impact on the development of Boston,” said jury leader Brian Healy. “There may not be a lot of work right now, but their positive and fun spirit is getting them ready for a time when there will be funds to build.” Article URL: http://www.bostonherald.com/business/general/view.bg?articleid=1226334