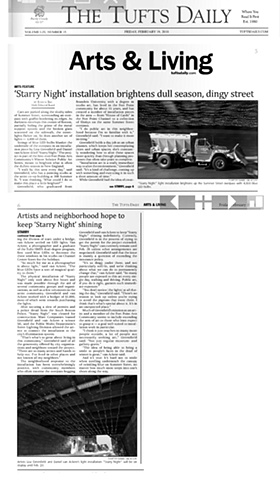 Published: Friday, February 19, 2010 Cars are parked along the slushy sides of Summer Street, surrounding an overpass with graffiti bordering its edges. As darkness envelops this corner of Boston, partially hiding the grime of the metal support system and the broken glass scattered on the sidewalk, the streetlights flicker on. So does another set of lights — 4,800 of them.

Strings of blue LED bulbs blanket the underside of the overpass in an installation piece by Lisa Greenfield and Daniel van Ackere titled “Starry Night.” The project is part of the first−ever Fort Point Arts Community’s Winter Solstice Public Art Series, meant to brighten what is often the dullest season in New England.

“I walk by this area every day,” said Greenfield, who has a painting studio at the artist co−op building at 300 Summer St. “I was thinking, ‘What could I do to make this place a little brighter?’” Greenfield, who graduated from Brandeis University with a degree in studio art, has lived in the Fort Point community for about 15 years, and has created a number of installation pieces in the area — from “House of Cards” in the Fort Point Channel to a collection of Slinkys on the same Summer Street overpass.

“I do public art in this neighborhood because I’m so familiar with it,” Greenfield said. “I want to make it more inviting.”

Greenfield holds a day job as an urban planner, which keeps her contemplating cities and urban spaces; she’s constantly wondering how to alter these spaces more quickly than through planning processes that often take years to complete.

“Installation art is a really immediate way to alter the environment,” Greenfield said. “It’s a kind of challenge, coming up with something and executing it in such a short amount of time.”

While Greenfield had the idea of creating the illusion of stars under a bridge, van Ackere settled on LED lights. Van Ackere, a photographer and a graduate of the Tufts/SMFA dual−degree program, first used blue LEDs to decorate the three windows in his studio on Channel Center Street for the holidays.

“So much for me as a photographer is about light,” said van Ackere. “The blue LEDs have a sort of magical quality to them.”

The physical installation of “Starry Night” only took about five hours and was made possible through the aid of several community groups and organizations, as well as a few volunteers in the artist community. Greenfield and van Ackere worked with a budget of $1,000, most of which went towards purchasing the lights.

After securing a slew of permits and a police detail from the South Boston Police, “Starry Night” was cleared for construction. Marr Companies loaned Greenfield and van Ackere a scissor lift, and the Public Works Department’s Street Lighting Division allowed the artists to connect the installation to the city’s illumination system.

“That’s what’s so great about living in this community,” Greenfield said of all the generosity offered by city organizations and neighbors toward the project. “There are so many artists and hands to help out. I’ve lived in other places and not known all my neighbors.”

The neighborhood response to the installation has been overwhelmingly positive, with community members who often traverse the overpass begging Greenfield and van Ackere to keep “Starry Night” shining indefinitely. Currently, Greenfield is in the process of trying to get the permit for the project extended. “Starry Night” can currently remain until Feb. 20 unless other arrangements are negotiated. Greenfield said that the issue is mainly a question of extending the insurance policy.

“It’s so dingy under there, and not particularly well−lit, and we’re thinking about what we can do to permanently change that,” van Ackere said. “So many people are exposed to this art every single day, walking and driving. Public art, if you do it right, garners such immediate exposure.”

“You don’t notice [the lights] at all during the day,” Greenfield said. “There’s no reason to look up unless you’re trying to avoid the pigeons that roost there. I think that’s what’s special about it. It’s in an unexpected place.”

Much of Greenfield’s mission as an artist and a member of the Fort Point Arts Community seems to include extending the arm of art to those who least expect to grasp it — a goal well−suited to installation work in particular.

“I think it just reaches so many more people outside, a lot of people not necessarily seeking art,” Greenfield said. “Not just regular museum− and gallery−goers.”

“The idea of being able to bring a smile to people’s faces in the dead of winter is great,” van Ackere said.

And it’s true: It’s hard not to smile when strolling underneath the canopy of twinkling blue on Summer Street, no matter how much snow seeps into one’s shoes along the way.