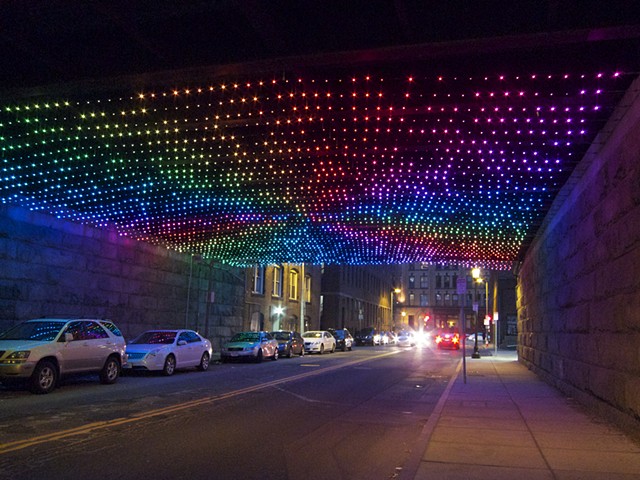 If you couldn’t find any twinkling blue LED lights at Target at Christmas time in 2009, that was because artists Lisa Greenfield and Daniel J. van Ackere, armed with a budget of $1000 from the Fort Point Arts Community (FPAC), bought out the entire stock from about a dozen stores in the Greater Boston area.

That, and a supply of heavy-duty binder clips to attach the lights to the bridge, was the beginning of their temporary public art project Starry Night, which was part of the FPAC Winter Solstice Public Art Series. “We wanted to brighten up our neighborhood, and make the stretch of road on A Street under the Summer Street overpass safer and festive” said Greenfield.

It was only supposed to be up for 8 weeks, but everyone loved it so they kept it up for the maximum time allowed by the Boston Art Commission for a temporary work of public art – 18 months. Costs over the $1000 came out of the artists’ pockets.

When the lights came down, local residents and workers were disappointed and asked to have it put back up. The artists agreed; recognizing the limitations of the temporary project’s components, they researched LED’s and controllers and redesigned the project for longevity. Greenfield and van Ackere, with FPAC, applied for and received a planning grant from New England Foundation for the Arts (NEFA) in 2011 to hire engineers to research how to make the project more permanent. They then applied for grants to fund the new project.

This weekend, the final phase of the new Starry Night installation will take place. Using fully programmable LEDs from Philips Color Kinetics and a LPC-20 controller from Pharos Architectural Controls, Ltd., the project is being installed with a minimum duration of 10 years. The capability of the new project will produce some breathtaking results, as each light can be programmed individually. With over 2800 nodes, and a full color spectrum, the new Starry Night can display constellations, shooting stars or fireworks. The colors can vary with the season and be programmed specifically for holidays and events. There will even be interactive wi-fi capabilities that can engage the public down the line. The installation is best viewed from A Street at Summer Street (between Congress Street and Melcher Street), in the Fort Point Channel neighborhood of South Boston.

An official “opening” of the project will take place on Dec 21, 2013 at 5pm, A Street under Summer Street. Gathering to follow at Lucky’s Lounge. (Cash bar. http://luckyslounge.com. 355 Congress Street, at corner of A Street.)